This mail brings you some campaign news and updates. 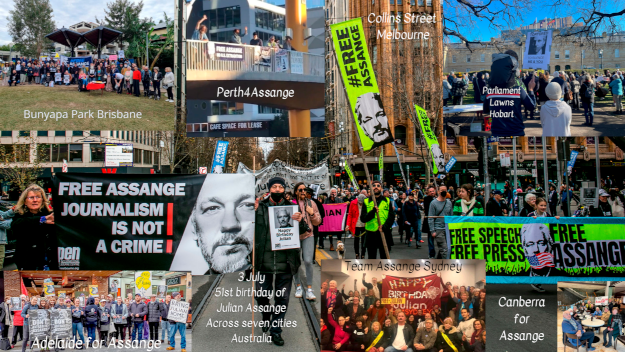 Last month was Julian's 51st birthday and his third in HMP Belmarsh. The Assange Campaign would like to extend our warmest thank you for supporters attending celebratory rallies across Australia and the world. In a blast of excitement Perth turned the six into seven cities.

Our many thanks to the speakers and all those who attended and supported events on line.

John and Gabriel Shipton spent most of the last two months on the road travelling across the US, UK, and Europe, advocating for Julian's freedom.

While in the US, meetings were held with civil society groups and in Washington with Congress-people, both Republican and Democrat, discussing the threat Julian's prosecution poses to the First Amendment.

While in Europe, John and Gabriel visited Germany and met with the German equivalent of the Bring Julian Assange Home Parliamentary Group. With a composition of 90 cross-party members representing all major parties, the group voted unanimously to present Julian's case to the Bundestag (equivalent to our House of Representatives). John and Gabriel's visit was well covered by multiple articles in the major newspaper Berliner Zeitung. This article covers the German Cross-party Parliamenary Group resolution
They also met with the German Foreign Ministry who are concerned about the threat Julian's prosecution poses to their own journalists.

While in the UK, they joined Stella on a very busy tour around much of the UK and Scotland supporting Ithaka screenings and Q+A sessions. In all speaking with thousands of people.

Gabriel's update while the on road is available on Consortium News YouTube.

In the meantime, grassroots supporters were busy preparing for a 250-person strong Converge on Canberra rally event outside Parliament House that was held last week in Canberra. You can watch the proceedings on Consortium News on YouTube.

John and Gabriel returned to Australia and have spent the past week in Canberra, briefing Australian politicians at Parliament House. Independent MP, Andrew Wilkie joined them in a press conference last week, announcing the re-forming of the Bring Julian Assange Home Parliamentary Group. They have called on the Albanese Government to step up the government's efforts to ensure an end to Julian's arbitrary imprisonment in maximum security HMP Belmarsh and to promptly end the US prosecution.

3. Quiet Diplomacy vs. No Diplomacy

So what is really going on with the Prime Minister's election commitment to support Julian Assange?
To answer with complete Aussie frankness. "We don't have a bloody clue mate! ... Does anyone?"

But there is! We fear that their commitment to Julian Assange has now slipped through the cracks.
Frustratingly, day by day passes with no visible action or slight positive affirmation.

In the last edition we considered what the Government's move from 'Megaphone Diplomacy' to 'Quiet Diplomacy' might mean. Labor's silence might mean they are locked in delicate negotiations allowing all to save face. Or it might mean they are too busy running the country. Or it might mean inaction and that the election commitment upon which we voted has been dishonoured. In that edition we opted for the benefit of the doubt, placing good faith in Labor's ability to deliver.

In Senate question time last week, Senator Shoebridge asked why the Prime Minisiter will not meet with John Shipton. Answering on behalf of the Prime Minister, Senator Don Farrell, concluded that this Government cannot interfere in another country's legal process (video on twitter or text on Hansard).
Is this a clear statement that Quiet Diplomacy for Assange really means No Diplomacy?
Has the election promise 'Enough is Enough' gone the way of election commitments of our previous Government?
Is this identical to the play book of our previous Government?

Continued inaction is in Julian's disfavour and is unacceptable.

In response we, the Assange Campaign, are drawing a 'Red Line' with the Labor's election commitment that 'Enough is Enough'.

We are requesting a show of good faith in 'Quiet Diplomacy' and suggest, by mid-October 2022, significant progress of Julian Assange's transition to House Arrest be made publically visible.

This is a non-political Human Rights request based on presumption of innocence before conviction and other rights in the The Core International Human Rights Treaties to which Australia and the UK are signatories and of which the UK has repeatedly contravened.
This is not interfering in an another country's legal process.
It is a request for fair play and for play by the agreed rules.

In support, a quote from Nils Melzer (Former UN Rapporteur on torture)
"Quite obviously, however, for purely preventive custody, the extremely restrictive conditions at Belmarsh were neither necessary nor proportionate - two mandatory basic requirements for any lawful interference with fundamental rights. Instead, Assange should have been moved to a less securitized institution or to guarded house arrest, with unrestricted access to his professional activities, to his family, his lawyers and the outside world more generally."

A new poll by Essential Research has revealed Australians strongly support the return of Julian Assange to his home country. Of those who are aware of Julian's plight, 88% either support calls for him to be returned to Australia or are undecided. Just 12% of people oppose his return. The data shows that Australian citizens want the Australian Government to take action in even greater numbers than the previous poll in March 2021.

In support of this call, the content in the Assange Campaign Mailer has been updated to specifically implore your representatives to join the re-formed Bring Julian Assange Home Parliamentary Group (or, thank them if they have already joined). If you have previously sent mails, we encourage you to send the new mail.

We have made it very simple and easy for you to do this on our website at www.assangecampaign.org.au/contact-your-representative/.

We have an estimated 41 MPs supporting or joining the Parliamentary group which is dramatically improved over the original 11 members group formation in 2019. Since that time the mailer has facilitated over 110,000 mails to Members of Parliament. Your efforts here have significantly assisted in creating a respect with which John and Gabriel are now received in Parliament House.

Ithaka is still screening on the ABC. It is being promoted well and getting good reviews. Please share the link iview.abc.net.au/show/ithaka-a-fight-to-free-julian-assange with friends.
The first night screening of Episode 2 gained over 300,000 viewings. The total number of viewings is now over 500,000.

The Assange Campaign has received a $250,000 donation. We thank Mr Packer immensely for his donation and believe this showcases the ever increasing width and breadth of support in our campaign.

8. The Book - The Trial of Julian Assange

Nils Melzer's book, The Trial of Julian Assange, has just been 'banned from Parliament'.
It is a highly recommended read for all Assange campaigners and supporters.
It is available at most of our events or conveniently on line from multiple outlets including Dymocks (selected on price).
You can view and share excerpts from the book, general thoughts and availability in book shops or libraries at twitter.com/TrialAssange.
Suggestions for favourite quotes are also welcome via email to trial_assange@assangecampaign.org.au.

The various Assange Campaign teams around Australia are working together on proposals to work in sync with the UK team. It estimated that 2,500 to 3,000 people will be required to surround Australia's Parliament House. The teams are brainstorming local and more accessible options. If convenient, please keep this date free and contribute to a world wide event.
Campaign events are being regularly posted on assangefreedom.network/event or follow and share support for various actions on our Facebook page.

Do you want to help spread the word of Julian's human rights, press freedom and democracy?
Perhaps you're interested in the grassroots of political parties?
Do you enjoy finding and creating a vibrant office space? Or, know anyone who might?
Assange Campaign Inc. is a volunteer-driven organisation and we are looking for 2-3 people to support our small team with three key projects.
Check out the current opportunities at www.assangecampaign.org.au/volunteer-opportunities-at-assange-campaign, and please share with family and friends.

Thank you again for your support for human rights, press freedom and democracy.